Paved With Good Intentions--Keith B. Darrell 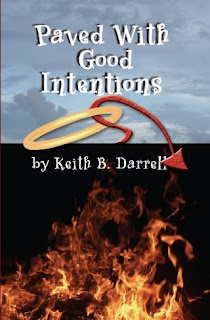 Exiled on Earth, naive angel Gabriel and amoral demon Lucifer -- in the human guise of “Gabe Horn” and “Lou Cypher” -- form an unlikely partnership as private investigators in Las Vegas. Their adventures take them across the seven heavenly realms, into the nine levels of Hell, through the dream realm of the Dreamscape, and even through time to Camelot. Along the way, the pair encounter a wickedly funny assortment of angels, demons, witches, warlocks, vampires, and other supernatural creatures.

Meet some of the most imaginative characters in contemporary fantasy, including an intriguing array of protagonists (Miss Twitch, a Salem witch; Emma, a British schoolgirl and witch-in-training, and Morgan Summers, a Dreamwalker) and antagonists (sadistic witch-hunter Nathaniel Thornhill, a golem, a Paiute Shaman, the corporate vampires of Nosferatu, Inc., trampires, gangsters, and nefarious demons). Some of the vampires include Sharon -- she’s Jewish, crosses don’t bother her; Pandora -- trouble follows her like a shadow; Claude -- he’s too claustrophobic to use a coffin; and Artemus -- a 10-year-old boy who’s been a vampire for nearly 457 years. But the real stars are the ultimate odd couple, Gabriel and Lucifer, whose comedic banter and improbable escapades will amuse and thrill readers and leave them asking for more.

Q: What will readers like about your book?
It's funny and quirky, yet filled with adventure and drama. It's well written. The characters are drafted with rich characterization, and the novel is written as episodic fiction -- a series of self-contained stories that add up to a unified tale, as the reader sees the protangonist grow and evolve, and the plot expands in surprising directions.


Q: Why did you go indie?
My first book, "Issues In Internet Law", dealt with time-sensitive subject matter that was best served by indie publishing, meaning it could be brought to market faster. Since then, I haven't even considered anything other than publishing through my own company.