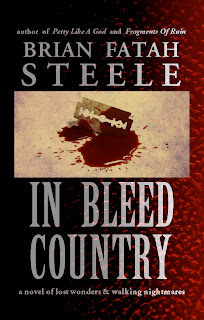 BRIAN FATAH STEELE is an author of Horror & Urban Fantasy fiction, much of it often written with a "Post-Mythic" genre element. Along with self-publishing his own work, his articles and stories have appeared in myriad magazines and online journals. Steele lives in Ohio with two cats that are probably plotting his doom. Surviving on a diet primarily of coffee and cigarettes, he occasionally dabbles in Visual Arts and Music Production. He still hopes to one day become a Super Villain.

What is The Bleed Country? The space between words in a prayer and the last number in Pi. It is where faith & dreams are held safe, where unborn terrors lurk and all the answers are painted in colors that don't exist. There have always been Agents who protect Bleed Country, individuals granted powers who walk the under-roads known as The Scar and seek to keep the balance. But now cards have been thrown, and while the only true constant in this reality is change, it is coming faster and more surely than anyone could have predicted. Sides will be drawn for the battle of Bleed Country, and not everyone will survive. . .

Q: What will e-readers like about your book?: I attempted to combine what I found to be the best concepts in modern horror and urban fantasy.  Without straying into the realms of vampires or noir, I wanted to create a story that drew on my childhood loves of comic books and horror stories.  It's a more ensemble cast of characters, some with very defined roles and others in more grey areas.  I tried to make a fantastic situation as humorous, terrifying, romantic, and ultimately realistic as possible.

Q: Why did you go indie?: I've released multiple books now, and I enjoy having full creator control - especially over my cover art.  As a former Fine Arts major years ago at Kent State University, I not only want to have a say in my cover art, but I have the ability to create it as I feel it best represents my story.  Too many wonderful authors get their tales ignored thanks to poor cover design and artwork, and that's a shame.

Q: Who are your favorite authors in your genre?: My greatest influence has easily been Clive Barker.  The concepts of Brian Lumley, and the prose of Anne Rice.  H.P. Lovecraft dictates my imagination, but it comes out in the style of Grant Morrison and Warren Ellis. 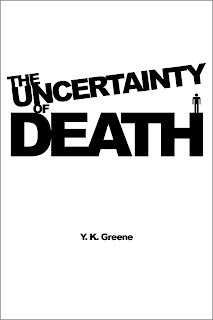 Y.K. Greene is a former volunteer worker, teacher’s assistant, tutor, VOD editor, celebrity blogger, porn and sex toy reviewer. Current daughter, sister, wearer of really kick ass boots and novelist. She has weird ideas but she’ll try to keep them on the SFW side this time. Maybe. Probably. For a while anyway.
Death.
The scariest unknown in any one person’s entire lifetime. For centuries people have personified and anticipated the horror and the majesty of this unavoidable fate, even going so far as to invent legends of how to avoid it.
No one expects a harried, overworked and socially awkward business woman who loves her employees like the family she’ll never have. This Death has never been very good at games of skill or chance and is keenly self-conscious, always going the extra mile to make others comfortable around her.
Two mortals, Leo Kaylor and Jules Harper are about to meet a very different Death than they’ve ever dreamed of, and embark on a chaotic journey that will test the very meaning of friendship.
Q: What will e-readers like about your book?
So far I’ve gotten a lot of comments from readers loving this fresh take on Death, though everyone has a different favorite character they’re rooting for.
Q: Why did you go indie?
I enjoy unusual ideas and stories. Finding a home for those ideas and stories isn’t easy and rather than stress over finding them just the right home, I like to give them to the public quickly. Doing so allows me to keep working on new stories without one of the biggest stressor to creation.
Q: Who are your favorite authors?
I really love the works of Jaqueline Carey, Stephen King and Michelle West.
Amazon: http://www.amazon.com/dp/B004KZOTM6
Amazon UK: https://www.amazon.co.uk/dp/B004KZOTM6
Smashwords: https://www.smashwords.com/books/view/38743
###
Posted by Author Scott Nicholson at 10:12 AM