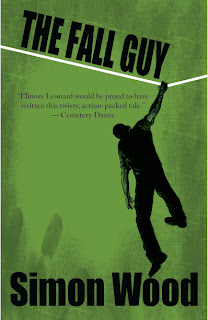 SIMON WOOD
THE FALL GUY:
Todd Collins has failed in every job he's ever undertaken, but that all changes when he backs his jalopy in a shiny, new Porsche belonging to a drug dealer. When the police stop the drug dealer for a broken taillight that Todd has caused and discover a cocaine shipment, a West Coast kingpin holds Todd responsible. On the run from organized crime, Todd discovers his true calling.
Q: What will e-readers like about your book?
I think people will get a kick out of how a relatively innocuous situation.  A fender bender shouldn’t get totally out of hand and take someone on a dangerous adventure, but sometimes life can be odd and it’s the little things that can lead to massive repercussions.  It’s a story of chaos theory in action.  J
Q: Why did you go indie?
The story had lived its life in paperback and had gone out of print.  The advent of eBooks has meant I can give the book a second lease of life and introduce it to a next set of readers.
Q: Who are your favorite authors in your genre?My favorite crime writers include James M Cain, Raymond Chandler,  Lawrence Block, Patricia Highsmith, Robert Crais.  I could go on all day, but I'll stop there.  :-)
Learn more about THE FALL GUY at http://simonwood.net/fall.html
THE FALL GUY is available from the following outlets.
Kindle:  http://www.amazon.com/The-Fall-Guy-ebook/dp/B00427YO2W
Smashwords: http://www.smashwords.com/books/view/24170?ref=SimonWood
Lowlifes (Join the manhunt at www.lowlifes.tv)www.simonwood.net
www.facebook.com/simonwoodwrites 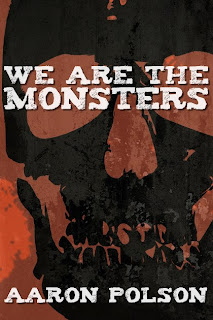 http://twitter.com/simonwoodwrites
###
Aaron Polson currently lives in Lawrence, Kansas with his wife, two sons, and a tattooed rabbit.  To pay the bills, he teaches high school English. Aaron’s stories have been reprinted in The Best of Every Day Fiction 2009 and 2010, listed as a recommended read by Tangent Online, and received honorable mention in the storySouth Million Writers Award and Ellen Datlow’s Best Horror of the Year.
We are the Monsters is a short novel about regret.  Yes, there are drunken teenagers, ghosts, a haunted pond, and a few reanimated corpses, but its mostly about regret. The narrator discovers, no matter how well he tries to hide the truth, a horrible decision will stay with him for the rest of his life.  It just might destroy everything he loves. Q: What will e-readers like about your book?It's quick, quirky, and full of rich imagery.  I love the main character's voice--a very authentic teenager.  Unexpected turns keep a reader guessing.  I've tried to play with some of the conventional "horror" genre tropes and do them a little different.  For example, the ghosts are afraid of the monster, just like the narrator and his friends.  Q: Why did you go indie? I went indie because I want to communicate directly to my audience.  Some stories need more filtering, more "gate-keeping".  We are the Monsters is different, and at the length (35,000 words) a hard sell to most publishers.  To write longer just to meet quota would be wrong.  I love these words.  These are the right words.  Q: Who are your favorite authors in your genre?  I'm a big fan of Stephen King (of course).  Jeff Vandermeer has a wonderful way with words, too.  "The General Who is Dead" is one of the most hauntingly beautiful short stories I've ever read.  There's a fellow in England named Michael Stone I expect we will hear big things from.  His stuff is always spot on.  Tim O'Brien, while not exactly in my genre, has always been a favorite.  We are the Monsters at Amazon.com 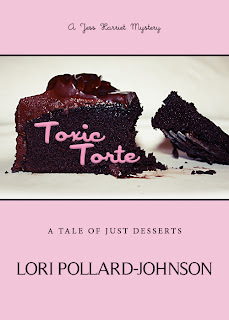 Readers enjoy the characters Jess Harriet, the sassy heroine; Rod, her amorous editor; Tom, a dating disaster from college who still holds a flame for Jess; Cherrie, a fellow news reporter by week and cheerleader by weekend; and a host of chefs who seem to be cooking up a case of sweet revenge, as well as the savory descriptions of Seattle and its bistro fare.

WHY DID YOU GO INDIE?

I've sold two books and a slew of short fiction and nonfiction the traditional route. I've done book signings and writer's conferences, and have always wanted a chance to sell directly to the reader who will be enjoying the story. Indie, and more specifically my imprint, Sassy Girl Ink, gives me and a select group of authors an opportunity to do that. All Sassy Girl Ink authors have facebook pages that allow readers to directly correspond with the writer. It's taking reading to a whole new, interactive level. And it's a lot of fun!

WHAT ARE YOUR FAVORITE AUTHORS IN YOUR GENRE?

This is a tough question. The truth is, I'll read almost anything, and find authors I love in every genre. I even blog about it on my facebook page--It's entitled "Books of 2011: Fawning Adorations and Snarky Critiques in One Sentence...Or Less." To recap the past year, I've enjoyed Emma Donoghue's ROOM, Matthew Dicks's SOMETHING MISSING, Dr. Drew Pinsky's THE MIRROR EFFECT, Josh Bazell's BEAT THE REAPER, David Cristofano's THE GIRL SHE USED TO BE, Mike Birbiglia's SLEEPWALK WITH ME, George Harrar's THE SPINNING MAN, Kathryn Erskine's MOCKINGBIRD, and Michio Kaku's PHYSICS OF THE IMPOSSIBLE. Perennial favorites include Ursula K. LeGuin's STEERING THE CRAFT, Walter Dean Myers's MONSTER, Jack Gantos's HOLE IN MY LIFE, Janet Evanovich's STEPHANIE PLUM SERIES, and Colleen McCullough's THE LADIES OF MISSALONGHI.