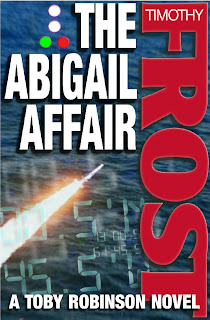 Timothy Frost- The Abigail Affair
After twenty-five years running an advertising agency in central London, Tim Frost went a bit crazy, sold up, bought a yacht and sailed away to the Caribbean with his wife. Now he writes full time, and divides his working year between Norfolk, England and Grenada, West Indies.
The Abigail Affair: Toby Robinson is twenty-two and broke. He lands a job as junior deckhand and steward on a Russian billionaire's motor yacht in the Caribbean, and feels his luck is about to change.

It is, but not in the way Toby hoped. On his first night aboard he is framed for the murder of a guest. And that's just the start of his problems.

His attractive crewmate Julia seems to be the only one on his side. But can he trust her?

With his mobile phone confiscated, armed only with a winning smile and a flair for mixing cocktails, can Toby clear his name, stay alive - and foil the sinister international conspiracy that threatens to entangle him?

It's New Year's Eve and something terrible will take place at midnight. Time is running out, and so are Toby's options ...

Q: What will e-readers like about your book?
I hope they will enjoy the non-stop action and adventure, which takes place on two small islands in the Caribbean and on the ocean. The book seems to appeal to readers of all ages from teens to seniors, particularly those who have a sense of humor.

Q: Why did you go indie?
My first novel Final Passage, written in 2003, received multiple rejections from UK publishers and agents – some of them very rude. When Smashwords appeared on the scene I thought, ‘Why not?’ and uploaded it as a freebie. I got 13,000 downloads, mostly on Barnes and Noble, and thirty or forty reviews, which both encouraged me to write again, and gave me valuable clues as to how to improve my offering for the e-book reader the second time around. 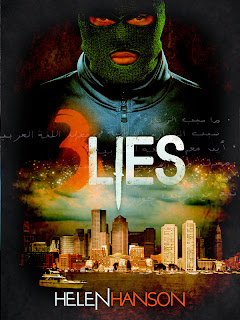 Helen Hanson- 3 Lies
I’m a former corporate droness that writes thrillers.  And I cut off a 737 mid-air, once.  Only once.
Product description:
At CIA headquarters, a young officer discovers that terrorists may have commandeered their computer systems to launch an unauthorized mission. Elsewhere, conspirators abduct nine people to manipulate the rules of their game. Two disparate ambitions -- Clint Masters becomes the reluctant link in the chain of danger.

Ever since Clint’s almost ex-wife dumped him, he bobs along the Massachusetts coast in a sailboat with his black lab for company. He avoids all forms of technology, which is no mean feat for the burned-out founder of CatSat Laboratories. Tired of clutching the brass ring, he needed to untether, step off the corporate treadmill, and smell a flower. Fortunately, he met one -- Beth, a beautiful, unspoiled woman who doesn’t treat him like a commodity. His relationship with her offers more promise than his marriage ever did, even if she is on dialysis for her recovering kidneys.

Until the day Beth goes missing.

In spite of the evidence, her family refuses to admit she’s in danger. Without routine dialysis, she won’t survive. As Clint realizes that he loves Beth, damn-near ex-wife Paige sashays back into his life with disturbing news.

While the CIA young gun tracks his quarry, Clint enlists the help of two men to find Beth, a blithe Brit named Merlin, and Todd, his playboy partner-in-tech. But Clint has to find Beth before her kidneys fail. And before someone puts a bullet in his head.
Q: What will e-readers like about your book?
My characters aren’t impervious uber-ultimates but use the available tools to change their situations.  They seek truth, pleasure, a bit of humanity, and routinely make me laugh.
Q: Why did you go indie?
I was betrothed to an agent, but in 2010, he left me at the altar clutching a wilting manuscript.  By then, the paradigm had shifted to favor indie authors.  I’m located somewhere on the control-freak spectrum, anyway.
Q: Who are your favorite authors in your genre?
John le Carré, Len Deighton, Craig Thomas, Stephen Coonts, and the author of the last book I read.
www.HelenHanson.com
3 LIES