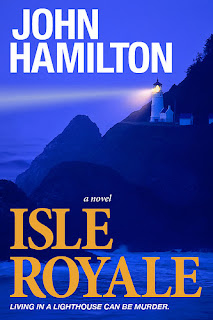 John Hamilton is a bestselling author and journalist. His work includes books about fantasy & folklore, science fiction, the national parks, and pirates. Lewis & Clark: Adventures West (Sparrow Media Group) was a finalist at the 17th Annual Minnesota Book Awards in 2005. He is a two-time Golden Duck Award winner for excellence in children’s science fiction literature.
The year is 1924. The place: Isle Royale, a remote island on Lake Superior. Clarence MacDougal, keeper of Wolf Point Lighthouse, stands ready to guide sailors through treacherous waters.
One storm-tossed night, French-Canadian bootleggers arrive. The gang’s leader is Sean LeBeck, a former lover of Collene MacDougal—the lightkeeper’s wife. LeBeck is determined to rescue Collene from her dreary life and rekindle their passion, even if it means taking her off the island by force.
The lightkeeper’s son, Ian, escapes during the storm, only to stumble upon a hidden cove, home of the last remaining members of the Coast Guard cutter Chippewa. A dark secret forced the crew to banish themselves. Now, given one last chance at redemption, the ancient mariners set out on stormy Lake Superior in a desperate attempt to save the day.
Q: What will e-readers like about your book?
Isle Royale is a tale filled with action and adventure, in a wilderness setting that’s both mysterious and breathtaking. It’s a coming-of-age story, but it’s also about personal redemption and courage. And it has a villain you love to hate.
Q: Why did you go indie?
I like the immediacy and control that indie publishing provides. And hearing directly from my readers is the best feeling in the world.
Q: Who are your favorite authors in your genre?
Early on, I was inspired by the works of H.G. Wells, Ray Bradbury, and Jack London. Today, I’m a big fan of Dan Simmons, Neil Gaiman, and Tim Powers.
Website/blog: http://johnchamilton.com
Amazon: http://www.amazon.com/Isle-Royale-ebook/dp/B004G5ZTMO/
Barnes & Noble: http://search.barnesandnoble.com/Isle-Royale/John-Hamilton/e/9780982845929/?itm=1&USRI=isle+royale
###
Saffina Desforges- Sugar & Spice 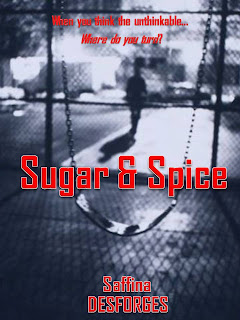 I am a thirty-something, crime-thriller writer and my debut novel has just been released on Amazon & Smashwords. I live in England and have been writing 'seriously' for only the past 18 months.

When you've got two young children, and you think the unthinkable, where do you turn?

Sugar & Spice is a ground-breaking new crime-thriller set against the background of Britain’s fragmented criminal justice system, with the key protagonists the mother and partner of a murdered child.

Inspired by a news story of a man who begged a Judge to give him a longer sentence, because he knew he would harm another child if released without treatment, Sugar & Spice is meticulously researched, asking the questions society prefers not to have answered. At once disquieting and challenging, Sugar & Spice is car-crash reading.

It’s every parent’s worst nightmare: A child fails to return home. As hours turn to days, all they can do is hope. Some children never come back...

Two boys find the severed arm of a missing child. For the distraught mother, Claire Meadows, and her partner Matt Burford, the arrest of local sex-offender Thomas Bristow seems to offer closure. But doubts soon emerge. The Met officers who “interview” Bristow are from the Gene Hunt school of policing, and the confession appears worthless when another child is killed while Bristow is on remand awaiting trial.

Driven by a mother’s need to know, Claire visits Bristow in prison. He presents a compelling defence, convincing Claire not only that he is innocent of harming her daughter, but that his previous convictions were not what they seemed.

Running parallel to this we meet Greg Randall, respectable accountant and utterly devoted father of six year old twins. But for Randall, the murder has brought to the fore private demons he has long been struggling to cope with:

Fearing he might one day lose control, Randall seeks counselling at a prestigious private clinic, licensed by the Home Office to treat sex-offenders. Randall’s struggle to balance his family life as he undergoes “therapy,” runs alongside the hunt for the child-killer, until eventually the two story-lines inexorably converge.
With the Police inquiry floundering, Matt and Claire embark on their own investigation, teaming up with a second-year psychology student and a fourteen year-old truant schoolboy to bring one man’s reign of terror to an end.

Warning: The research is meticulous, and the characters based on real-life studies.

This is a novel every parent should read.
But be warned: In Sugar & Spice not all things are nice...

I think that although the subject matter is disturbing, the message is important and the research makes it quite real, something that people can relate to (even though it is a work of fiction).

Q: Why did you go indie?

Purely because of the subject matter being described as 'uncomfortable' by mainstream agents. I figured that I might as well gauge public interest to the book and how well readers deemed it to be written and allow myself time to write something more mainstream whilst I am doing so.

Q: Who are your favorite authors in your genre?

I love Patricia Cornwell and Kathy Reichs etc, but I am starting to read a lot more indie authors such as Mel Comley.

Link to web site or blog or Amazon/Smashwords

My website: http://www.saffinadesforges.com
Posted by Author Scott Nicholson at 7:19 AM